College Hill neighbors David and Cathy Sevier have been in Uganda since early January. Their work includes consulting and teaching with the Uganda Health Federation and the International Health Sciences University in Kampala. Here is a recent post on their blog about last week’s elections there.

It’s Saturday PM in Uganda, and we’ve decided to send out another blog –  much to tell.

A brief rundown of the week:

Wednesday: David and I were trained as official “election observers”…  and briefed about things to watch for, like stuffed ballot boxes, imposters, multiple voters, and other attempted tricks. When it came to spending the day at the polling station on Thursday, however, we learned that only one more slot was available at our local site, so I decided to work at home and monitor things online. Or, as it turned out, try to keep up online…

Thursday: It’s election day and David and our friend Rose showed up at 0630 as official election observers, and they find almost 50 people there… but no ballot boxes, ballots or other election materials.  People wait … and wait …  and wait.  As the sun rises, and the election officials give one after another prediction of a start time, it’s clear something is awry.

We are, after all, in the capital city, and less than 5 miles from the election commission – so what’s up? Lines of voters snake down the street with hundreds of people waiting in the hot sun. 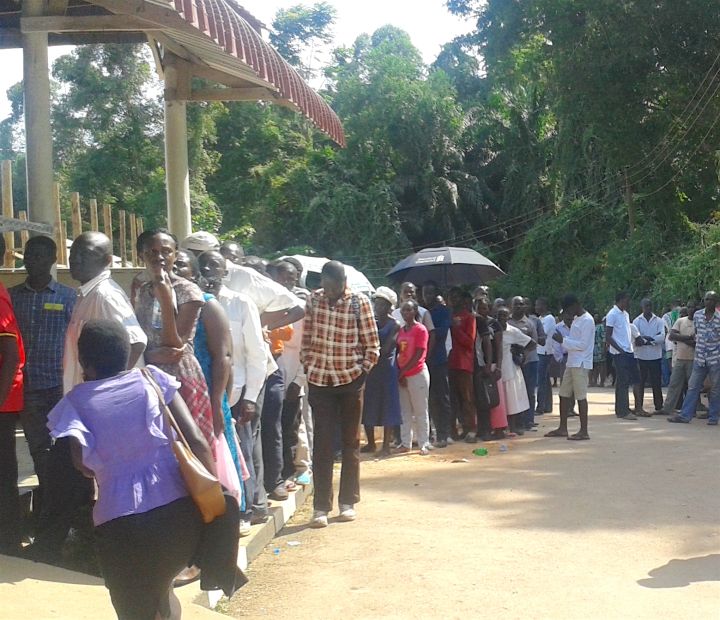 But, here is what’s so amazing … these people are astonishingly positive and patient amidst the uncertainty. I can’t begin to wonder what we Americans would do, or say, in such a situation. These good Ugandan citizens intended to exercise their right to vote, and nothing was going to stop them.

Finally, a little after 12PM, ballot boxes arrived and things got set up … following a very ceremonious demonstration of documents by the officials.   See photo left as the presiding officer lifts up ballots for all to see …

Voting finally began at 12:30, and David texted an hour later that 76 (of 917 registered) people had voted. Polls were scheduled to close at 4PM and hundreds and hundreds were still waiting!

David reported a number of observers were also present – here he is with the head of the UN delegation, a former minister of defense from Angola.

Then, at about the time voting began, our Internet mysteriously died, along with all social media (twitter, facebook, whatsapp) – and, as it’s turned out, the social media’s been down ever since.

David and I stayed in close contact by text, speculating about what would happen if polls closed as scheduled at 4. We both felt quite safe, but remained frustrated by lack of information, and a seemingly obvious attempts to frustrate voters

In the late afternoon, as I heard (our neighbors’) radio reports that rioting broke out downtown, things got a bit more dicey.  Uncertainty creates concern, and many of those who support change sensed there were planned efforts to ensure a one-sided outcome. David reported all was well at the polls, however, and the election officials (after some urging from observers) made the wise decision to keep going until all citizens lined up could vote. Finally, at 7:30PM, 447 people had been through, almost 50% turnout, despite all the challenges. Pretty amazing.

Then, it was time to tally ballots, and the laborious task of counting, and elaborately displaying ballots to all observers, lasted till almost 1AM!  David and Rose finally made it home, tired and hungry, but proud of their role in this fascinating process.

Friday: Despite some polling places receiving NO balloting materials on election day, announcements came out that they would open again for a time on Friday. Thus, the electoral commission could state there was provision for anyone to vote.   Social media remained down, however, and the government finally acknowledged it was their doing – to “ensure the safety of all citizens.”

The press also got out the word that leading presidential contender, Kizza Besigye, was arrested (again) as he alleged institutional voting fraud.  His supporters continued demonstrating, while at least two people were killed in rioting near his campaign headquarters.

Saturday: As I write, the (expected) results of the election are announced: President Museveni, in power now for 30 years, is named winner.  International observers have already reported dirty tricks and major lack of transparency. It appears unlikely there will be any substantive impact, however.  TIA (this is Africa), after all. …

Where things will go from here are still uncertain, so… we ask you to keep all the many wonderful citizens of Uganda in your thoughts and prayers as they strive for a better future. We’ll try to keep you updated from here. We have another week before our planned departure (2/28). Thanks for continuing to read our blog, and to keep peace in mind as pictures like this dominate the press –

This entry was posted in Neighbors and tagged Cathy Sevier, David Sevier, Uganda. Bookmark the permalink.